Question: What is a Recall?

Answer: A Recall is the process for which citizens of the District of Columbia can remove an elected official from office.

Question: How does a Recall work?

Question: How many signatures are needed to Recall a Ward-level Councilmember?

Answer: The petitioners need to collect signatures of 10% of the registered voters in the Ward.

Question: How many registered voters are there in Ward 2?

Answer: Based on the DC Board of Elections February 28 tally, Ward 2 currently has 51,590 registered voters.  Therefore, the Recall campaign needs to collect 5,159 signatures from Ward 2 voters.

Question: Where can I find the rules around the District of Columbia’s Recall process?

Answer: The DC Municipal Regulations concerning the recall of elected officials can be found Title 3, Chapter 11.

Question: Where is Ward 2 in Washington, DC?

Answer: The map below shows the boundaries of Ward 2. Click on it to see a larger version: 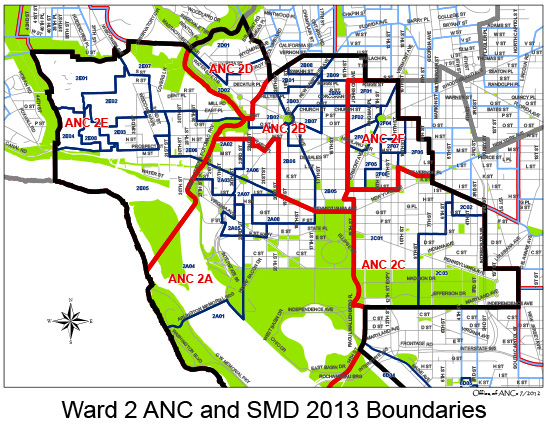 Answer: Unfortunately, the DC Board of Elections does not permit DC voters to sign petitions online.

Question: Can you bring me a petition to sign?

Question: If the recall campaign turns in a sufficient number of signatures of Ward 2 voters to the Board of Elections, when will the Special Election take place?

Question: Is the Committee to Hold Jack Evans Accountable (aka Ward 2 Citizens Recall) the same as Sack Jack?

Answer: NO! While our goals may be similar, we are two completely different political entities. Sack Jack is a Political Action Committee that was formed by DC residents who wish to pressure Councilmember Jack Evans to resign. The Committee to Hold Jack Evans Accountable (aka Ward 2 Citizens Recall) is a recall campaign committee that has the sole purpose of collecting signatures from registered Ward 2 voters to force a Special Election that will give voters the opportunity to kick Councilmember Jack Evans off the DC Council. As a recall campaign committee we are bound by a different set of laws, including campaign contribution limits. We urge you to support BOTH efforts!

Question: Since the Home Rule Act was passed by Congress, which created the 13-member DC Council, how many DC Councilmembers have been recalled?

Answer: Zero! Help make history with us by signing the recall petition to create a Special Election that will remove Councilmember Jack Evans.